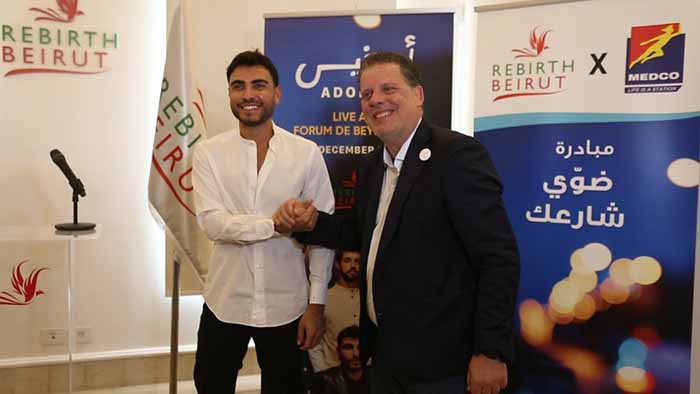 Gaby Fernaine: We promised and we delivered! And “Rebirth Beirut” will continue to light up the whole capital

In a press conference held in its headquarters, Rebirth Beirut officially announced the “Adonis” concert that will take place on 29th December 2022 at Forum de Beyrouth. The proceeds will go to support the association’s activities, most notably the “Let’s Light Up Our Community” initiative that was launched in May 2022.

During the conference, a video highlighting the projects of the association was displayed. The founder and president, Mr. Gaby Fernaine, explained how the association has worked, since inception, to restore life and safety to Beirut and said:

“Since its establishment, Rebirth Beirut has transformed its headquarters into a cultural oasis to host art exhibitions for a large number of local and Arab artists and it continues to showcase new works and support emerging talents. We decided to follow the famous proverb: Instead of cursing the darkness, light a candle! And we did not just light a candle! … We have illuminated streets, avenues, neighborhoods, stairs, and squares, and God willing, we will light up all of Beirut!”

Fernaine added: “We lit 34 streets and 13 traffic lights that were completely destroyed, in addition to 3 main avenues, two squares and two stairs”.

And, we asphalted 1,000 potholes as part of the “Shielding Road Potholes” campaign, which aims to reduce accidents and improve road safety in Beirut.