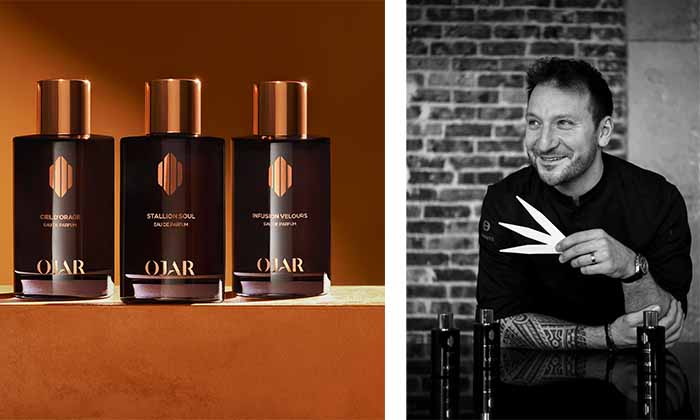 Inspired by art and craftsmanship in many forms, OJAR is delighted to announce its collaboration with the French pastry chef, François Daubinet, to celebrate the OUD collection. United by their common values of creativity and innovation, François Daubinet has reinterpreted the OJAR Oud collection scents – Infusion Velours, Stallion Soul, and Ciel D’Orage – in three unique pastry creations.

Having held numerous positions as Pastry Chef for several renowned Houses, François Daubinet is distinguished by his creations that colour outside the lines of conventional patisserie and his passion for excellence, elevating the fine desserts into an art form. These remarkable compositions go far beyond exceptional flavours, capturing many senses at once. François Daubinet embraces the patisserie as an inexhaustible playground where he can always reinvent himself. With OJAR, François Daubinet is exploring the dialogue that exists between ”Haute Parfumerie” and ”Haute patisserie”:

“What appealed to me is the idea of bringing together two different universes in one” says François Daubinet. “The creative process between a perfumer and a Pastry Chef is similar, we both have the same passion of transforming ingredients into unexpected creations that trigger emotion and memories. With OJAR, we are sharing the same approach of revisiting our heritage with a touch of modernity and paying a tribute to core ingredients.”

To craft bespoke desserts, François Daubinet sought inspiration from the Oud ingredient and its distinct facets among each of OJAR’s creations:

Infusion Velours, a juicy and fruity Oud that recalls the freshness of agarwood in its initial form, is reimagined as a tartlet with notes of cinnamon, red fruits and caramelized chocolate, lying on a bed of raspberry water.

Ciel d’Orage, the smoky Oud, elicits both aesthetically and by its subtle chocolate nuances, triggering resemblances to the Bakhoor.

These three desserts will be introduced during an exclusive OJAR afternoon tea in presence of the Pastry Chef that will take the guests through a sensorial journey.

Celebrate the festive season with the perfect gift at Damas Jewellery

In Vanilla We Trust: Introducing Kayali’s new and limited-edition fragrance,Vanilla…