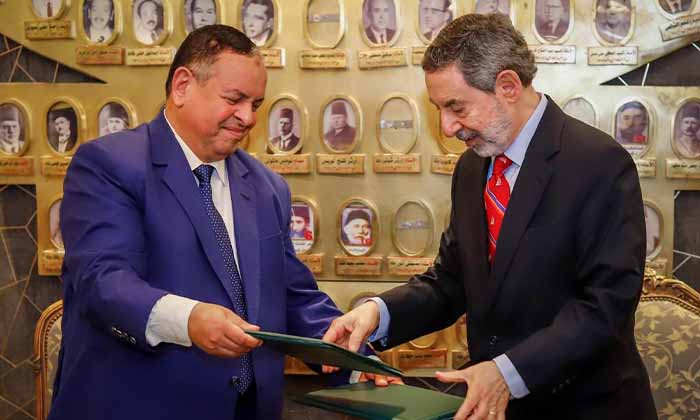 • Patriota: Egypt is one of the most important trading partners in Africa and the Arab world • Chohfi: The ‘Easy Trade’ system assists in eradicating fraudulent practices, making imports cost-effective and expediting customs clearance

The Arab-Brazilian Chamber of Commerce (ABCC) devised a digital action plan, in partnership with the Egyptian Customs Authority, to establish an electronic link for the seamless exchange of documents and data pertaining to the import and export of shipments with Brazilian Customs, by leveraging ABCC’s electronic system.

Osmar Chohfi, President of the Arab-Brazilian Chamber of Commerce, outlined how the ABCC aims at establishing the ‘Easy Trade’ electronic connection system to facilitate data and information sharing between Brazil and all Arab nations. He stated that, following the electronic connection agreement with Jordan, which already came into effect early this month, the action plan forged today makes Egypt the second Arab country to take meaningful steps to implement the system.

Chohfi said: “One of our most significant trading partners in both Africa and the Arab world is Egypt. Brazil and Egypt’s annual trade volume was closer to USD 2.5 billion last year, demonstrating the value of simplifying trade movement to increase this figure by twofold. The action plan signed today serves as a foundation for future collaboration between the ABCC and the Egyptian Customs Authority to further the interests of the two nations.”

Chohfi further highlighted that the AI-powered electronic linkage system verifies the authenticity of documents issued from Brazil, eliminating the need for paper documents. He also noted additional benefits of the system such as eliminating fraud, lowering import costs, and expediting customs clearance.

Tamer Mansour, Secretary-General and CEO of the ABCC, said: “We are pleased to collaborate with the Egyptian Customs Authority to implement the full electronic linkage between Brazilian Customs and the Egyptian Customs Authority. ABCC’s electronic linkage system is the only connection system with Arab countries, as it links with the Ministry of Agriculture, Ministry of Health, Ministry of Industry, and Customs, along with all relevant entities that issue halal certificates in Brazil.”

Mansour guaranteed the safety and veracity of shipments exported to Egypt by ensuring the authenticity of all documents issued through the new system. Antonio Patriota, Ambassador of Brazil to Egypt, lauded the Egyptian government and the Egyptian Customs Authority for the successful organisation of Sharm El-Sheikh Climate Change Conference (COP 27), which hosted delegations from across the globe. He pointed out that a large delegation from Brazil participated in the event, in the presence of Brazilian president-elect Luiz Inácio Lula de Silva, who was very well received by the Egyptian government.

Patriota stated that during COP 27, the elected Brazilian president invited Egyptian President Abdel Fattah El-Sisi to visit Brazil next year. Additionally, he requested that the head of the Egyptian Customs Authority meet with Brazilian customs officials to explore avenues for encouraging cross-border trade and streamlining procedures. He further highlighted that Egypt has been one of the most significant trade partners in both Africa and the Arab world.