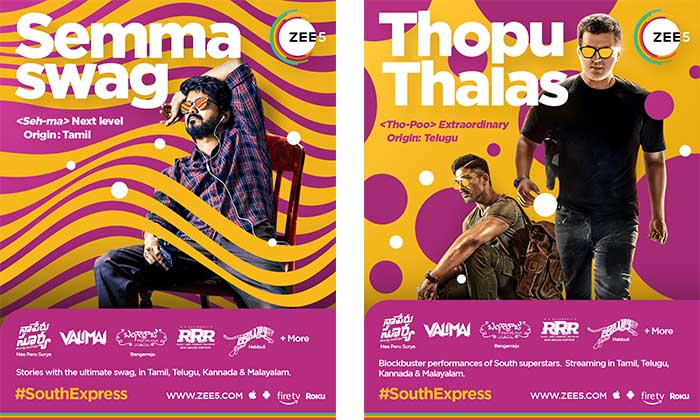 As the geographic boundaries and language barriers blur in the age of digital entertainment, the watch preference of viewers is widening. ZEE5 Global ‘s rising popularity of regional titles across its international markets bears testimony to this emerging viewership trend. The platform in the past one year has notched up record-breaking viewership globally on many of its recently launched titles across South Indian languages – Tamil, Telugu, Malayalam and Kannada. It has also seen a whopping 50% of its overall viewership garnered from non-Hindi titles.

Catering to this demand, the platform has recently launched a South Express campaign, featuring an exclusive collection of movies across South languages.

South Indian movies are renowned for their over-the-top action scenes, punchy dialogues, larger-than-life superstars and extreme swag. Enhancing this experience for all its viewers, ZEE5 Global has launched its South Express campaign, which is a special collection of a power-packed lineup of movies across South languages – the perfect destination to binge more than 1000 movies and 100 originals in Tamil, Telugu, Kannada & Malayalam. Now streaming all the action, drama, music and dance from the South is just a click away!

The campaign highlights these specific nuances using colloquial and popular lingo across South Indian languages, such as ‘Dhulu Action’ (translating to ‘next level of action’ in Telugu), ‘Semma Swag’ (‘awesome’ in Tamil), ‘Thopu Thalas’ (‘extraordinary superstars’ in Telugu+Tamil), and more. The use of these terms establishes our deep connection with South Indian content.

ZEE5 Global has been bridging the gap in global access to South language titles with blockbuster titles like Ajith Kumar starrer Valimai and S.S.Rajamouli’s magnum opus, Roudram Ranam Rudhiram (RRR). The titles amassed 500 and 1000 million streaming minutes respectively within a week of their release. Underlining the exponential growth in demand for South lingual titles, the platform’s expansive regional content collection is now being watched in around 190 countries.

The promise of quality entertainment in South Indian language titles

Upping the ante on South Indian language content, the platform is doubling down on its investments especially in Tamil and Telugu content in 2022.

In April, the platform announced a compelling Tamil content line up for 2022, including Prakash Raj-starrer drama series Anantham. Many more exciting new titles await Tamil fans globally as part of this line-up including recent releases such as Veetla Vishesham and upcoming series Paper Rocket. Also lined up for 2022 is a compelling slate of Telugu titles including recently released Gaalivana, Recce and Maa Neella Tank.

Archana Anand, Chief Business Officer, ZEE5 Global, said, “The exponential demand for South Indian language content in the U.S. is very heartening to see, and we are uniquely positioned to cater to this demand. With a rich library of blockbusters, originals and TV Shows across Tamil, Telugu Malayalam and Kannada, ZEE5 Global remains deeply committed to bringing engaging content across genres to meet  the ever-growing entertainment appetite of its South Asian viewers. Our South Express campaign is a fun tribute to the real flavour of South India with all its swag and unique lingo, brought to life in this curation of the latest movies and shows on the platform.”