“Richards Bay is vital to the economies of KwaZulu-Natal and the entire country. It’s viability and development depend on a fully-functioning and efficient transportation system, with air connectivity playing a key role in driving business and investment in the coal-terminus town and the industries it hosts,”

“We are ready to welcome Richards Bay customers back onboard our flights and help reignite growth and economic activity in the area,” explained Airlink CEO and Managing Director, Rodger Foster.

Airlink’s Richards Bay flights will be operated with 29-seat Jetstream 41 turboprop airliners with the following schedule: 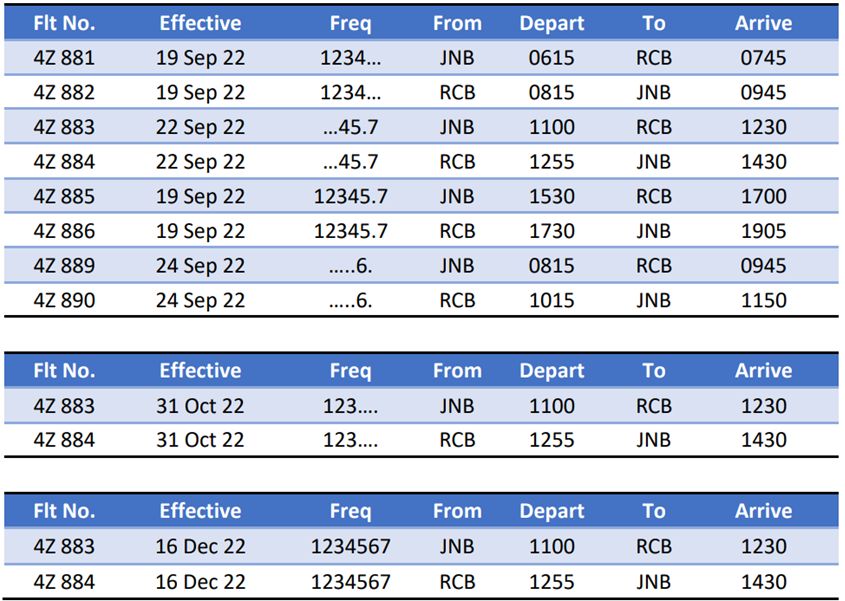 Travel on Airlink flights can be planned, booked and managed on www.flyairlink.com, on the FlyAirlink smartphone app and through travel agents.

With the resumption of flights on the route, Airlink is re-connecting Richards Bay with the world with a choice of convenient connections to Airlink’s expansive network of domestic and regional destinations as well as those around the world through Airlink’s global airline partners.

Richards Bay, a popular holiday destination on the Mhlatuze River lagoon in KwaZulu-Natal’s north coast. The area is also known for its mining and manufacturing industries.

To offer travellers more choices, enhanced services, and greater connectivity the airline has recently signed a comprehensive codeshare agreement with Qatar Airways; connecting 45 destinations in 13 countries across southern Africa and the rest of the world.

Wayout and Alfa Laval extend their partnership in the Middle East with a pop-up showroom in Dubai.

Mysk Moon Retreat re-opens its doors for the winter season

SIG launches ‘Recycle for Good’ in Egypt – an initiative for…

SITA PARTNERS WITH VERSA NETWORKS TO DELIVER A TAILOR-MADE…

THE ONLY BEAR YOU NEED IN YOUR LIFE