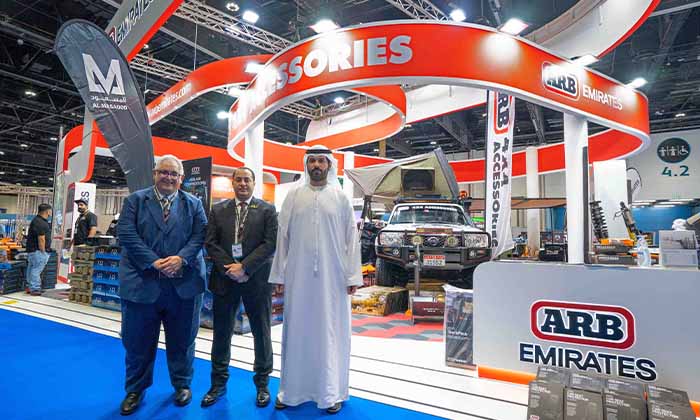 ARB Emirates, which operates under the umbrella of Al Masaood Group, and is the leading market brand in four-wheel-drive accessories and outdoor gear, is participating in the Abu Dhabi International Hunting and Equestrian Exhibition (ADIHEX) as Automotive Partner, for the second consecutive year. Held under the patronage of His Highness Sheikh Hamdan Bin Zayed Al Nahyan, Ruler’s Representative in Al Dhafra Region and Chairman of the Emirates Falconers’ Club, the 2022 edition of ADIHEX marks ARB Emirates’ 13th consecutive participation.

The exhibition, which commenced on 26th of September at the Abu Dhabi National Exhibition Centre (ADNEC), under the theme ‘Sustainability and Heritage…A Reborn Aspiration’, will conclude on 2nd of October 2022. During which, ARB Emirates will feature its new range of products which includes Canopies, Summit Bull Bar and Under Vehicle Protection (UVP) for land cruiser 300 series, as well as the Esperance Rooftop Tent and much more.

Additionally, ARB Emirates will offer a discount of up to 70 per cent on all its products displayed at the newly designed ARB stand located at 3.D03, which is considerably larger than the previous year. Adding to the enthusiasm of the visitors, three influencers; Mahdi Al Amin Tony Keyrouz, and Thaer Adnan will participate in the event with their own vehicles which are fully customised with ARB’s products. The influencers will be present at the ARB stand and interact with the customers and exhibitors about the products during the annual exhibition.

Walid Youssef, General Manager, ARB Emirates said: “For over a decade, ARB Emirates has partnered with ADIHEX to gather like-minded peers and enthusiasts, to celebrate the unique culture and customs of the UAE. We see ADIHEX as an ideal platform to highlight our commitment to safeguarding and promoting the UAE’s cultural legacy in line with the directives of our wise leadership. This year once again, we are looking forward to meeting with the fast-growing off-roading community in the region and showcase to them our latest products, we’re also excited to network with our industry peers and expand on mutual business opportunities.”

All the items on display by ARB Emirates at the exhibition are intended for outdoor experiences. For a variety of single cab, additional cab, and dual cab vehicles, ARB’s Canopy offers secure storage space. ARB’s innovative Summit Bull Bar incorporates several modern design characteristics to enhance both the aesthetics and functionality of contemporary automobiles. The Esperance Rooftop Tent by ARB is a hard-shell rooftop tent that is incredibly light, thin, practical, and modern. Compared to earlier generations of cars, the ARB Under Vehicle Protection (UVP) for the Toyota Landcruiser 300 series features a redesigned four panel design and is logically intended to ease access for service.

ADIHEX – the largest exhibition for hunting, equestrian and heritage preservation in the Middle East and Africa region, was initiated by the late Sheikh Zayed bin Sultan Al Nahyan in 2003 with the mission of promoting and preserving the region’s cultural heritage, as well as enhancing the awareness of youth and younger generations about traditions and the authentic Emirati culture. This year, the event is expected to bring together over 105,000 visitors. It is set to attract thousands of falconers, hunters, and equestrian enthusiasts from all over the world, as well as members of the royal families of the UAE and other GCC nations. With over 680 exhibitors and brands participating in the event, visitors will view the latest technologies, innovations, and trends in equestrian, hunting and camping gears and accessories for the traditional and modern ways of hunting.

Spinneys lights up the streets of Achrafieh