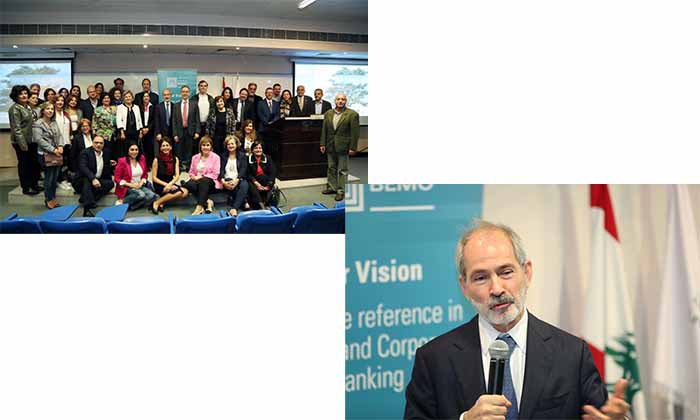 Through the second edition of "Back to our Cedar Roots” Initiative

In a ceremony held at the campus of the Lebanese American University LAU in Beirut, in the presence of journalists, editors, artists, partners and Banque BEMO family, 200 cedar trees were allocated in a draw for 200 Lebanese living abroad and not having a father of Lebanese nationality, thus, within the second edition of Banque BEMO initiative “Back to our Cedar Roots”.

This initiative aims at restoring pride in what Lebanon stands for, reinforcing the sense of belonging of people of Lebanese origin, and casting attention on the unfairness suffered by Lebanese women who are unable to pass the Lebanese nationality to their children.

During the ceremony, Dr. Riad Obegi, Banque BEMO Chairman of the Board, welcomed and addressed the audience saying: “we chose to hold the ceremony at LAU because it has been at the forefront of gender equality since its founding as the first school for girls. The Independence Day has a special significance in our hearts, it marks the country birth and it is perfectly associated with this initiative in support of Lebanese mothers’ rights.”

He then added: “Banque BEMO has responsibilities towards the community and society where it lives. The society is the mother, and to honor our mothers and support their rights, we have launched the initiative “Back to our Cedar Roots”.

In her testimony, Mrs. Marie-Noelle Fattal, a Lebanese mother who cannot pass on her nationality to her children, said that as a Lebanese woman married to a foreigner, “she feels the humiliation whenever her children are asked to take the foreigners lane at the airport as well when they have to renew their residency permit, as if they do not belong to the community”. She added her wish that” Lebanese women get their basic rights and have the ability to grant their nationality to their children”.

BEMO Banque reaffirms once again its statement, “2022 is the year of Revival”. The Bank believes that Lebanon is for everyone who has roots in the country, it is a message and not only a country, and this message is one of openness and generosity.

This year’s edition of Banque BEMO “Back to Our Cedar Roots” falls within its strategic partnership in support of “Arztak Hawytak” – a sustainable and environmental initiative to afforest 10,452 cedar trees in the municipal land of Ehden – launched by Rotary Club Beirut Cadmos in collaboration with Jouzour Loubnan, Global Compact Network Lebanon and Municipality of Zgharta-Ehden.