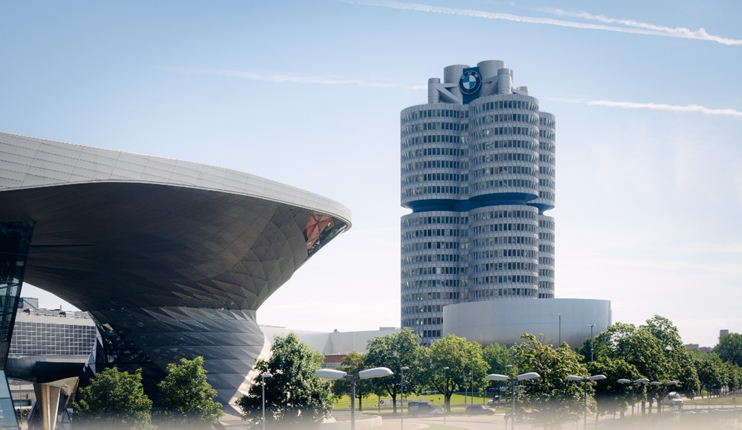 Between 1970 and 1972, a timeless icon with global appeal was created in Munich in just 26 months, with 500 builders, 200 architect plus engineers and draughtsmen from 12 nations clocking up 3.5 million working hours during the construction. Over 3,000 facade elements were manufactured for the first time in Europe using the Japanese cast aluminium process, and today, the building, and its neighbouring plant, are home to BMW staff from more than 100 nationalities.

On 22nd July, the BMW Group celebrated its corporate headquarters as a world-famous architectural icon, inviting over 200 international guests from the worlds of business, culture, politics and society. The keynote speech by architect and Pritzker Prize winner Francis Kéré, as well as the appearance by Nihal Saad, Chief of Cabinet of the United Nations Alliance of Civilizations, made the ceremony a special event, with illustrator Christoph Niemann creating a specially commissioned artwork inspired by the BMW tower.

In addition to a performance by star tenor Jonas Kaufmann as well as a speech by Dr Markus Söder, Minister President of Bavaria, the festivities concluded with a special highlight: twelve vertical dancers from US dance project BANDALOOP spectacularly transformed the BMW Headquarters into a 100-metre-high stage. Based on the impressive choreography of Melecio Estrella, and performing for the first time in Germany, the ensemble created a weightless synthesis for an interplay of architecture and dance.

To this day, the BMW Group Headquarters, with its suspended construction, is one of the most innovative engineering buildings of the post-war period, wowing onlookers with four cylinders suspended from a cruciform steel beam construction on the roof. Interestingly, the building did not grow from the bottom up,  but rather the upper floors were first manufactured on the ground, then moved upwards hydraulically on the massive “tower shaft” made of reinforced concrete and completed in several segments. In August 1972, opposite the renowned Olympic site designed by Behnisch & Partner with Frei Otto, the BMW Group Headquarters was completed. Designed by Austrian architect Professor Karl Schwanzer, the administrative building has since become a timeless icon, representative on the global stage of both Munich and the company. With its impressive facade, visionary construction, and spatial concept, the “suspended tower” uniquely combines visual conciseness with a constructive and functional logic.

The innovative power of Schwanzer’s design represents the BMW Group then as now, making the company headquarters a beacon of sustainable mobility for tomorrow. Celebrated in the media as the “most impressive and coolest corporate headquarters in the world”, it is not only a symbol of economic success but also stands for international exchange, peace and interculturalism. Today, the “built communication” implemented by Schwanzer points the way to a new era of electrification, digitalisation, and circularity.

Dr-Ing. Dr-Ing. E.h. Norbert Reithofer, Chairman of the Supervisory Board of BMW AG:

“The BMW tower has left its mark on the BMW Group. It is an icon of architecture that is brimming with a pioneering spirit. It represents BMW’s awareness and self-confidence that progress comes through innovation. This building is so spectacular because it leaves no one untouched. Every generation at BMW is responsible for leading the company into the future. Karl Schwanzer’s headquarters has provided the BMW Group with a sense of identification on its way to becoming a global player.”

Oliver Zipse, Chairman of the Board of Management of BMW AG:

“Talking about visions also means thinking beyond the spirit of the times and developing a sense of what will endure in the future. The BMW Headquarters has thought this out far ahead and even today it is hard to beat in terms of modernity. This building is always an incentive to leap further ahead than one would normally expect. We strive to make the next hundred years as successful as the last hundred years.”

“If you have decided to be an architect, you must have the courage to want to fulfil visions. Architecture is an art of communication, a means of communicating across centuries. Perseverance is creative. Accuracy, punctuality, continuity and modesty are the best of companions. Creating is not an agonising drudgery but a means for joy. To work joyfully makes life meaningful. In the design, clearly readable forms were chosen that convey precision, technical perfection and beauty of form as an expression of and association with the image of an automobile factory.”

The BMW Group can reflect on a decades-long tradition of working together with renowned architects. As early as Karl Schwanzer’s construction of the headquarters, the company consciously opted for a dynamic type of architecture which was later to continue with trend-setting buildings by Zaha Hadid with her BMW Group Plant Leipzig (2005), BMW Welt in Munich by Coop Himmelb(l)au (2007) and Sir Nicholas Grimshaw’s Rolls-Royce plant in Goodwood (2003). In 2022, Rem Koolhaas’ Rotterdam-based OMA office and the Danish architects of 3XN were commissioned by BMW to transform its Munich main plant and jointly shape urban production for the future.

The BMW Group Headquarters and the BMW Museum, popularly known as the “bowl,” are two of Munich’s most distinctive buildings and are cherished as icons of German post-war architecture. From the beginning, the BMW Museum was integral to Karl Schwanzer’s vision for the company’s headquarters. A special exhibition about the ensemble, which has been a listed building since 1999, conveys the history of the headquarters area in the museum’s foyer and presents architectural models from the time of its construction. The exhibition will be on display until October 3, 2022. Admission is free.

Fontana Welcomes You to the Magic World of Water at Dubai Festival City Mall, from…