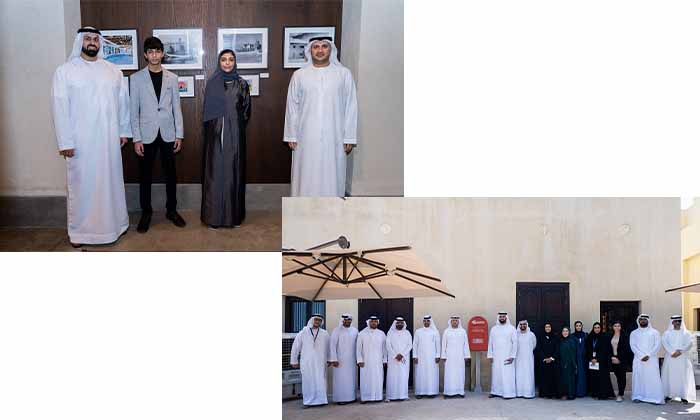 Emirates Post Group and Sharjah Investment and Development Authority (Shurooq) celebrated World Post Day, which is annually celebrated on October 9th, and marks the anniversary of the establishment of the Universal Postal Union (UPU) in 1874. The celebration took place in Heart of Sharjah, the historical destination under Sharjah Investment and Development Authority “Shurooq”, in the presence of H.E. Abdulla Mohammed Alashram, Group CEO of Emirates Post Group, and H.E. Ahmed Obaid Al Qaseer, Acting Chief Executive Officer of (Shurooq).

The celebration mainly focused on the launch of Heart of Sharjah postcards with each postcard carries a photograph captured in the 60’s by Hamid Durrani, one of the pioneer photographers in the Emirate of Sharjah. The event also awarded the winners at the 51st International Letter-Writing Competition that was organised by Emirates Post Group and the Universal Postal Union (UPU).

About the ceremony, H.E. Ahmed Obaid Al Qaseer, Acting CEO of Sharjah Investment and Development Authority (Shurooq) stated: “The partnership with Emirates Post Group is another milestone in Shurooq’s endeavours to preserve the heritage of Sharjah, spotlight an important era that established the modern Sharjah as we know it today, and keep the young and future generation connected with Sharjah’s heritage.”

He added: “The fruit of this collaboration and project holds a special place for Shurooq, as it documents and highlights Heart of Sharjah, and promotes it internationally wherever the postcard is sent across the world. At the same time, the launch of this initiative in Heart of Sharjah is aligned with our continuous support to creativity and talents, especially among the youth, and it builds bonds between the emirate, residents, and visitors.”

The newly launched Heart of Sharjah themed postcards can be found at Al Bareed Café, located next to “The Chedi al Bait, Sharjah” hotel, as visitors can print out their own personalized postcards, or can make a selection from the postcard collection “From Heart of Sharjah to The World”. Postcards can be sent out immediately by the letter mailbox placed next to the Café, as it could be delivered to all locations, locally and internationally. Emirates Post Group also provided special postage stamps for the newly added initiative at Heart of Sharjah.

Abdulla Mohammed Alashram, Group CEO of Emirates Post Group said: “We are pleased today to celebrate World Post Day with Sharjah Investment and Development Authority (Shurooq), from the historical location of where the first postal office in Sharjah was situated.  Our partnership with (Shurooq) allows us to showcase the rich culture of the UAE and demonstrate the significance of post throughout the years through postcards, stamps, and other special postal activities. We reaffirm our commitment to support the initiatives and events of our strategic partners.”

He added: “This year’s World Post Day celebration is themed ‘Post for Planet’, in line with global objectives to support circular economy principles and implement urgent measures to save the planet by adopting a more sustainable lifestyle. The world of Post and logistics plays an important role in the lives of people and businesses, and it is our duty to lead by example deploying the necessary resources and capabilities and to raise awareness on the role everyone has in contributing to the fight against climate change. We applaud and appreciate the students that participated in the International Letter Writing Competition that carried the same theme and hope more talented writers participate in next years’ competition.”

As for the letter-writing competition results, the winners were three students from different schools in the UAE. Winning first place was the student Mariam Faisal Al Hammadi from Al Rashidiya, whose letter represented the UAE at the international round of the competition at the Universal Postal Union located in Bern, Switzerland. Student Shatha Hazim Al Asmar won 2nd place, from Aisha bint Abi Bakr School, and the third-place winner was student Muath Dhaifallah Al Zarba, from Abu Krayyah School.

The winners received their cash prizes at the event for their unique ideas and for their fruitful efforts in the competition. Students from various schools in the UAE participated in the competition, of which 258 letters, that met all the conditions, went on to be evaluated by a joint committee from Emirates Schools Establishment and Emirates Post Group.