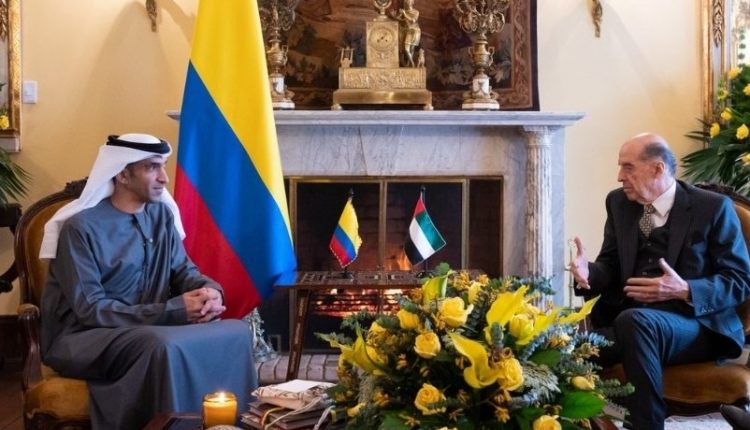 H.E. Al Zeyoudi: We look forward to strengthening the bonds between our nations and delivering new, mutually beneficial opportunities

H.E. Dr. Thani bin Ahmed Al Zeyoudi, Minister of State for Foreign Trade, attended recently the swearing in ceremony of His Excellency Gustavo Francisco Petro Urrego as the new President of the Republic of Colombia in Bogota.

H.E. Al Zeyoudi conveyed the greetings of H.H Sheikh Mohamed bin Zayed Al Nahyan, President of the UAE, and His Highness Sheikh Mohammed bin Rashid Al Maktoum, Vice President, Prime Minister and Ruler of Dubai, and their wishes for continuous success, progress, and prosperity to meet the aspirations of the Colombian people.

In response, President Gustravo Petro conveyed his wishes to H.H. Sheikh Mohamed bin Zayed Al Nahyan, President of the UAE, and H.H. Sheikh Mohammed bin Rashid Al Maktoum, Vice President and Prime Minister of the UAE and Ruler of Dubai. He also expressed his sincere appreciation for the participation of the UAE delegation in the ceremony, wishing the UAE continued progress and prosperity.

H.E. Al Zeyoudi’s attendance at the new Colombian President’s swearing in ceremony reflects the depth of the long-standing relations between the two countries that were strengthened by the launch of talks to establish a Comprehensive Economic Partnership Agreement, the first agreement of its kind for the UAE with a South American nation.

In his speech on the occasion, H.E. Al Zeyoudi expressed the UAE’s vision to strengthen ties with Colombia and create new opportunities for cooperation to achieve common interests. He also highlighted the UAE’s keenness to support this friendship and strengthen relations with Colombia in all fields to meet the aspirations of the peoples of the two countries.

In addition, H.E. Al Zeyoudi also met with HE Alvaro Leyva Duran, Colombian Minister of Foreign Affairs, and was accompanied by H.E. Salem Rashed Alowais, UAE Ambassador to Colombia, to discuss bilateral relations and ways to enhance them.

The UAE is Colombia’s largest trade partner in the Arab world and, in 2020, accounted for more than 40 per cent of Colombia’s foreign trade with the region.

MBRF launches workshops under its Dubai International Program for Writing

DISCOVER AN OPULENT SPA EXPERIENCE THIS EMIRATI WOMEN’S DAY AT THE ST. REGIS DUBAI, THE PALM