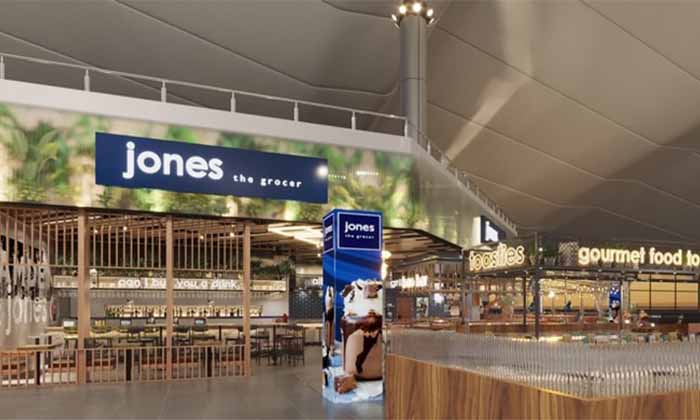 Jones the Grocer, the artisan café, bakery, patisserie, gourmet grocer, deli and cheese monger headquartered in Dubai, announces further global expansion into the United Kingdom in collaboration with TRG (The Restaurant Group) Concessions Ltd, one of the UK’s leading travel hospitality operators, and a division of TRG PLC. This exclusive development agreement for the United Kingdom’s airports created a winning bid for one of the largest concession awards at London’s Heathrow Airport where two venues, Jones the Grocer and Jones the Grocer Express, are set to open in 2023.

Comprising over 5,900 square feet in Terminal 2’s international departure lounge, Jones the Grocer will showcase culinary theatre in a food hall style development to create a truly immersive dining experience. A bar will serve craft beers, wine and cocktails alongside artisan cheese and meat boards as well as sharing plates. Chefs will cook Jones the Grocer’s modern, globally influenced, laidback food for breakfast, lunch and dinner in a live grill and kitchen. An island bao bar will steam and simmer an array of savory buns and noodle bowls. An Italian pizza oven and pasta bar will treat travellers to hand-thrown pizzas and freshly tossed pasta. With over 170 seats, Jones the Grocer at London Heathrow, will be a buzzing hub for foodies at one of Europe’s and the world’s busiest airports.

Jones the Grocer Express, located immediately in front of Jones the Grocer, is aimed at the hurried traveller looking for good quick-serve artisan food. This venue will offer pastries, pies, sandwiches, wraps, soups and freshly tossed salads. Expert baristas will pour fantastic flat whites along with smoothies, leaf teas, and a selection of hot and cold drinks. Travellers will have the opportunity to savour artisan cheese toasties and shop from a selection of Jones the Grocer’s grab and go retail.

This Heathrow opening marks a strategic phase in Jones the Grocer’s expansion and is a testament to the vibrant and globally relevant trend-setting food scene in Dubai and the UAE. It is also a testament to TRG’s pioneering recognition of emerging, dynamic brands quietly shaping the food and beverage scene around the world.

“Winning this award demonstrates TRG’s commitment, passion, and belief in Jones the Grocer as a world-class brand, as well as their desire to bring the best in food retail to the UK airport travel space. This will be Jones the Grocer’s largest airport store in the world and the first in the United Kingdom. My team and I look forward to bringing a stunningly designed Jones the Grocer serving fantastic food at London Heathrow,” said Yunib Siddiqui, CEO of Jones the Grocer.

“We are delighted to have won this large concessions award in partnership with Jones the Grocer, an excellent brand bringing a vast range of quality food options to passengers at Heathrow airport. Our agreement with Jones the Grocer is testament to our team’s ability to identify exciting brands worldwide and introduce new concepts to the travelling public,” commented Mark Chambers, CEO of Leisure and Concession at The Restaurant Group.

“As Heathrow continues to welcome back more passengers, I am delighted that Jones the Grocer will be joining us in Terminal 2 early next year. Jones the Grocer, with its international footprint, will bring the tastes of the world to the airport, a fitting way for passengers to start their journeys from Heathrow,” Fraser Brown, Heathrow’s Retail Director, added.

Headquartered in Dubai, Jones the Grocer has 32 locations worldwide with 6 awarded and trading locations at Dubai, Doha, and Bangalore International airports.  A further pipeline of 15 stores are in various stages of development showcasing the brand’s steady regional and global expansion.