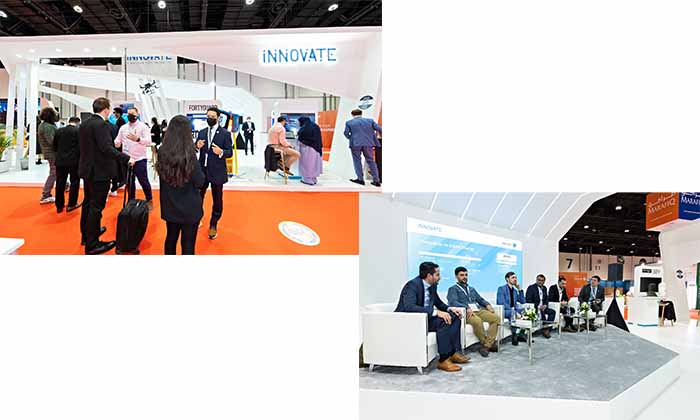 The 22 companies participating in Innovate this year will have access to lucrative investment opportunities and potential funding worth up to $200,000 through The Catalyst, Masdar City’s start-up accelerator

The three-day exhibition kicks off on January 16. It is supported by Masdar City’s start-up accelerator program, The Catalyst, which is providing 22 participating companies with the chance to pitch directly to an investment committee and win up to US$200,000 in funding.

Ahmed Baghoum, the acting CEO of Masdar City, said, “Since its launch in 2021, Innovate has helped dozens of companies kick off major projects in the region. The magic of seeing start-ups focus on emerging technologies to help the fight against climate change has inspired us to return this year with an even more ambitious exhibition. With The Catalyst on board, start-ups will have the chance to benefit from an accelerator specifically tailored to their needs and industries.”

Steve Severance, Masdar City’s director of growth, said, “Pairing The Catalyst with Innovate opens the door for aspiring businesses to gain our support and funding in the most efficient way possible. At Innovate, companies will be able to pitch their projects straight to our senior directors, and if they succeed, they will win our unwavering support. There are many benefits to joining The Catalyst beyond the funding opportunity. We also help member companies gain access to the Masdar City Free Zone and Abu Dhabi’s technology ecosystem.”

In its first edition, Innovate provided support and exposure to 20 emerging companies, some of which decided to return this year. FortyGuard, which provides solutions for optimizing energy resources, was one of them. The start-up, which launched in 2020, landed Masdar City as their first client through Innovate 2022, and several other deals followed.

“Masdar City is a regional ecosystem enabler. Taking part in their Innovate program opened a big door for us,” said Jay Sadiq, the FortyGuard founder and chief visionary officer. “Being in direct contact with major energy officials and decision-makers was the highlight of the event for us. We did not have to search for potential clients and supporters; they came to find us. Today, we serve 12 major clients who were a result of our initial deal with Masdar City.”

Another Innovate showcase, presented by The Catalyst, is called HydroArtPod, a smart indoor home garden that features ambient lighting and looks like wall art. Founded by Aline Pate, HydroArtPod is a small, fully automated garden that allows families to grow fresh produce all year round to reduce dependency on food retailers.

In addition to the exhibition, Innovate will host a series of panels covering a wide range of topics, including women who are leading in sustainability and the circular economy.