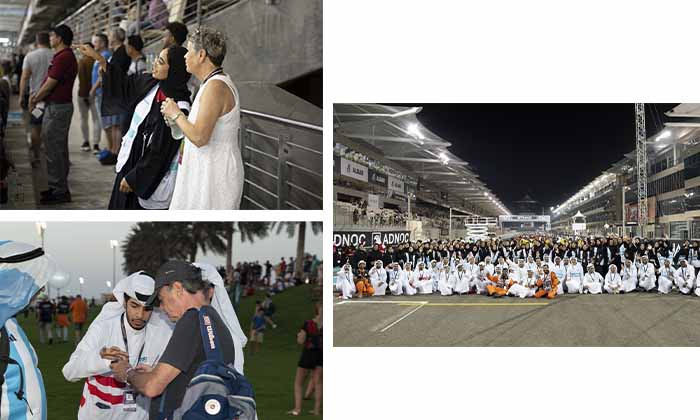 • His Excellency Ahmed Taleb Al Shamsi: “We express our pride in contributing to the success story of the Formula 1 race since 2009, through the presence of a group of proficient volunteers who have played a fundamental role in this journey."

Emirates Foundation has lauded the contribution of Takatof and Sanid volunteers in writing the success story of the major sporting event, “Formula 1”, by providing support to the organizing entities, guiding the public who are coming from different countries around the world to the United Arab Emirates, and welcoming the guests of this global event that is taking place in the capital, Abu Dhabi from 18th to 20th of November.

To emphasize on the volunteer work and in line with Emirates Foundation’s strategy to include volunteers who are equipped with superlative skills to manage large events, Takatof volunteers – who have diverse competencies and extensive experience – have been qualified to contribute to the success of this global event. The volunteers were segmented into teams, including the teams who were responsible for registration in Yas Mall, and others who are responsible for helping people of determination and the elderlies, and the media team that is present in all locations of Yas Marina to facilitate the task of local and international media in covering the event. Their role also extended to the protocol team and the team that helps in organizing the audience’s arrival to the Yas Circuit.

Given the diversity of the Formula 1 audience who speak different languages, there was an urgent need for a qualified multilingual team, and; therefore, Takatof and Sanid volunteers were fully prepared to receive visitors, guide them, and answer their inquiries, in addition to volunteers who speak sign language. While Sanid volunteers consist of well-trained individuals, who are prepared to respond to emergencies, reduce overcrowding, and ensure that public follow the precautionary measures.

The event witnessed a participation of more than 330 volunteers, who committed more than 7600 volunteering hours to make this event an outstanding success.

On this occasion, H.E. Ahmed Taleb Al Shamsi, CEO of the Emirates Foundation, said: “We express our pride in contributing to the success story of the Formula 1 race since 2009, through the presence of a group of proficient volunteers who have played a fundamental role in this journey. In this year’s event, we have volunteers who are multilingual and have various skills that can be considered a great addition to Formula 1, 2022. These volunteers will have a great role in making Formula 1 as a memorable event.

His Excellency added: “We look forward to highlighting the importance of volunteer work in our society and applaud a new accomplishment that can be added to our extensive record of achievements in contributing to the success of the most coveted international events and in the country.”

In preparation for this event, Emirates Foundation organized a series of events, in partnership with Abu Dhabi Motorsports Management, to prepare volunteers for this global event. The team-building event was held on the 4th of November, during which tasks were assigned and the team leaders were introduced. Motivational activities were also conducted to enhance the spirit of team work among the volunteers. Hamoud Al Shehhi, Area Supervisor, and Hassan Al Ali, Projects Lead at Emirates Foundation, delivered motivational speeches addressed to Takatof volunteers participating in the Formula 1 event

In addition, on November 11, a dry run was organized for all Takatof and Sanid volunteers participating in Formula 1, where they were briefed on the details of the event and trained to exercise the correct procedures in various situations. They were informed about their designated locations for the event. At the end of this familiarization round, all volunteers participated in a short quiz to test their information and knowledge in various aspects related to the event.

Emirates Foundation extends its thanks and appreciation to Abu Dhabi Motorsports Management Company and Yas Circuit for their privileged cooperation with the Takatof and Sanid volunteers who were present in the Formula 1 race and for providing them with undeterred support so that they could fulfill their volunteer duties with distinction and excellence. Emirates Foundation is also grateful for Yas Island’s thoughtful gesture towards Formula 1 volunteers, by offering them 200 free entry tickets to Yas theme parks including Ferrari World Abu Dhabi, Yas Waterworld and World Brothers Abu Dhabi as an acknowledgment of their relentless efforts.

It is worth mentioning that Takatof and Sanid volunteers encourage the culture of volunteer work in society, and they always demonstrate with their work, an example to follow in the sphere of volunteering and community participation for the Emirati community. It should also be noted that Takatof volunteers have been providing their endless support for the Formula 1 race and contributing to the success story of this global sporting event since its inception in the capital Abu Dhabi in 2009. Given the importance of ensuring the safety of visitors in this huge sporting event, in the following years a large number of volunteers joined Sanid program, which aims to prepare individuals to respond to emergencies and enable them to organize this event.