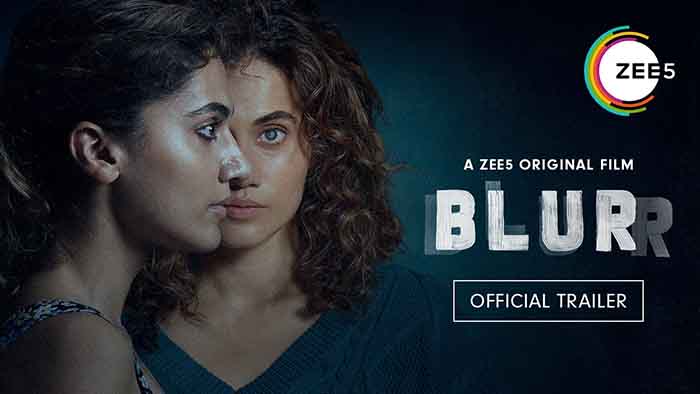 ZEE5 Global, the world’s largest streaming platform for South Asian content, unveiled the trailer of its much-awaited direct-to-digital film ‘Blurr today. Directed by Ajay Bahl, Blurr is an intriguing narrative that follows the story of twin sisters, Gayatri – Gautami and their encounters with the unknown world due to loss of sight. Packed with powerful performances by Taapsee Pannu and Gulshan Devaiah, this psychological thriller will exclusively premiere on ZEE5 Global in Hindi with subtitles from December 9, 2022.

As seen in the trailer, Blurr has a solid plot with thrilling twists and turns that will keep you captivated in shocking ways. Produced by Zee Studios, Outsiders Films and Echelon Productions, this visually distinctive film revolves around Gayatri who is slowly losing her sight whilst trying to investigate the death of her twin sister – Gautami. With impactful filmography and compelling dialogues being the catalyst of this thriller, the movie will linger in the darkest corners of your mind. So, watch the most anticipated film – Blurr on 9th December 2022 only on ZEE5 Global.

Get ready to decode the mystery, as Taapsee Pannu knocks it out of the park in the trailer! – https://youtu.be/nV7vJw6kXZg

Director Ajay Bahl said, “Blurr discovers angularities and depths of the human mind and the dark alleys it can traverse through. Blurr throws you into the murky waters where human needs intermingle with extreme delusional anger. The narrative and the plot of the film gave me a lot of different aspects to explore while directing. With spectacular twists and character portrayal, Blurr will satiate your craving for a mind-bending thriller. I want to thank Taapsee and ZEE studios for believing in the script and ZEE5 Global for platforming the film.”

Commenting on the film, Taapsee Pannu said, “Blurr taps into different sensibilities of an individual and that is purely why I decided to produce it as my first film. Donning the producer’s hat has been a spectacular experience. Apart from acting, I wanted to be creatively involved in the production, conception and various aspects of filmmaking which are seldom glamorised. Essaying the character of a woman pushed to the brink of mental endurance due to her sister’s death was vulnerable, raw, and clawing.”

Gulshan Devaiah further added, “Blurr is a movie that has a plot full of twists, turns & tension that build up the suspense which will keep you glued to the screen in anticipation of what’s going to unfold. After Duranga, this is my second collaboration with ZEE5 Global, and I wish to continue this successful association with them. Without spilling beans about my character, I would ask the audience to brace themselves for this slick & gritty thriller.