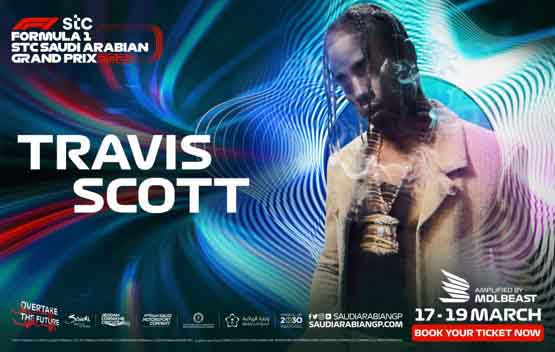 The concert will take place on the Main Stage of the Jeddah Corniche Circuit, F1®’s longest and fastest street circuit.

With over 40 billion total streams, dozens of gold, platinum, and multiplatinum certifications and eight GRAMMY award nominations to his name, Travis Scott is deserved of the title ‘global phenomenon’.

Following 2015’s platinum-selling album Rodeo, he has notched three #1 debuts on the Billboard Top 200, including the platinum Birds in the Trap Sing McKnight [2016], quadruple-platinum ASTROWORLD [2018], and JACKBOYS [2019].

His diamond-selling 2018 single “SICKO MODE” was named as one of Billboard’s “Songs That Defined The Decade,” made history as “the first hip-hop track to spend at least 30 weeks in the Top 10 of the Hot 100” and secured a GRAMMY award nomination.

In 2019, Scott appeared front and centre on the world stage, joining pop-group Maroon 5 and Outkast rapper Big Boi for the Super Bowl LIII halftime show. Later that year, he released “Travis Scott: Look Mom I Can Fly”, a Netflix documentary that followed and delved deep into the artists incredible rise to fame from 2014 onwards.

In 2022, he joined forces with fellow global superstars Drake and 21 Savage on their blockbuster #1 album Her Loss.

The addition of Scott to the line-up is just the start of what’s come at the FORMULA 1 STC SAUDI ARABIAN GRAND PRIX 2023 weekend. Fans will be treated to 3 whole days of world-class racing featuring the world’s greatest drivers as well as entertainment from the biggest names in music. Last year’s edition of the FORMULA 1 STC SAUDI ARABIAN GRAND PRIX proved to be one of the races of the season while the post-race entertainment on the Main Stage ensured the adrenaline kept flowing long after the last car returned to the pits.

With Travis Scott now confirmed as the first major headliner of the weekend, it is clear that the FORMULA 1 STC SAUDI ARABIAN GRAND PRIX 2023 will guarantee three days of non-stop thrills and excitement. It is definitely not to be missed!

INTRODUCING THE ‘ROMANCE’ BY NEWBY TEAS