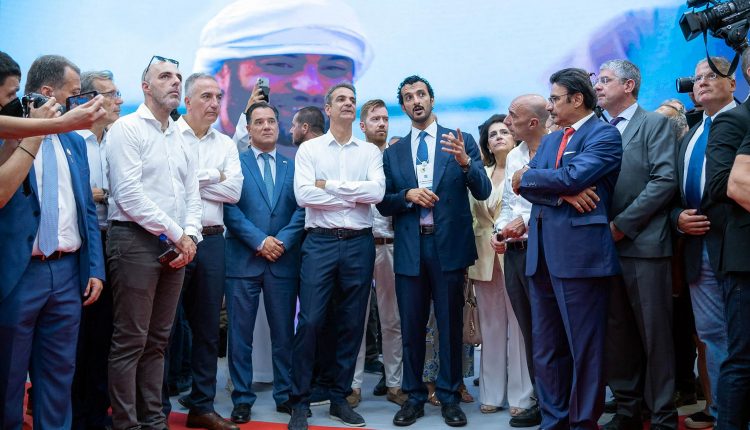 The UAE Minister of Economy, H.E. Abdulla Bin Touq Al Marri, held bilateral meetings, at the UAE Pavilion in Thessaloniki International Fair TIF 86, with several high-ranking Greek Ministers & officials to boost cooperation & bilateral relations between the UAE and Greece. The extensive meetings between the two sides also shed light on the most attractive economic sectors to invest in the UAE — including non-oil industries, whose foreign exports have recently hit an all-time high.

The Greek Prime Minister, H.E Kyriakos Mitsotakis, opened the UAE pavilion at Thessaloniki International Fair 86, on Monday – September 12 in the presence of the UAE Minister of Economy, and then held a meeting with the UAE Minister of Economy, H.E. Abdulla Bin Touq Al Marri, where the two officials discussed ways to boost cooperation between the two countries and ways to enhance bilateral trade & investment relations. The Greek Premier and the UAE Minister also attended a seminar on US and UAE investments in Greece.

The Minister of Economy, H.E. Abdulla Bin Touq Al Marri, met on the first day of TIF 86 with H.E. Adonis Georgiadis, Minister of Development and Investment of Greece, and H.E. Kostas Fragkogiannis, the Deputy Minister for Economic Diplomacy and Extroversion — where they discussed the ways to expand the areas of economic cooperation between the two countries, boosting trade & investment flows between UAE & Greece, increasing the non-oil trade between the two nations in addition to exploring additional promising opportunities in the markets of the two nations.

The Minister of Economy, H.E. Abdulla Bin Touq Al Marri, also met H.E Vassilis Kikilias, Greek Minister of Tourism, where they discussed several issues, including mechanisms to boost Tourism in the two countries, mutual air flights, and boosting the technological tools used in the services provided to tourists. These discussions aimed to enhance the sustainable development of the Tourism sector in the UAE & Greece in addition to enhancing this vital sector’s contribution to boosting the Gross Domestic Product (GDP) in the two nations.

The Minister of Economy, H.E. Abdulla Bin Touq Al Marri, also met with H.E. Kostantinos Tasoulas, President of the Hellenic Parliament, where they discussed the frameworks for boosting cooperation in all fields, especially economic & trade areas, with the ultimate purpose of booting sustainable development in both countries.

Furthermore, the UAE pavilion sheds light on the UAE’s new economic model, the remarkable success of UAE’s strategy of establishing a diverse economy & developing the nation’s non-oil economic sectors, in addition to the UAE’s pioneering position on the global trade map. These successes are proved by the current upward trajectory of UAE’s non-oil exports. The UAE has recorded its highest-ever non-oil exports in the first half of 2022, with a total value of AED 180 billion.