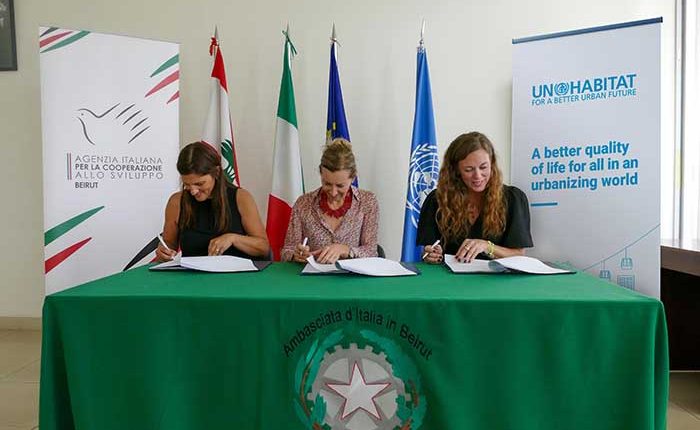 UN-Habitat and Italy sign a €2.3m project to rehabilitate public spaces within the Mar Mikhael train station and restore housing units in Beirut

The Italian Agency for Development Cooperation (AICS) and the United Nations Human Settlements Programme (UN-Habitat), signed a two-year agreement to rehabilitate and revitalize the public space area of Mar Mikhael railway station in Beirut and restore damaged housing units within the blast-affected area.

The signing ceremony was held at the Italian Embassy in Beirut and co-signed by Italian Ambassador to Lebanon, Nicoletta Bombardiere, and Head of UN-Habitat Lebanon Country Programme, Taina Christiansen.

The project entitled: “Ensuring safe public spaces and adequate housing for all within the City of Beirut” is funded by AICS and will be implemented by UN-Habitat in close coordination with the Directorate General of Antiquities (DGA), the Railway and Public Transportation Authority (RPTA) as well as the Municipality of Beirut and Governor of Beirut. The project will enhance the housing conditions for vulnerable populations affected by the Beirut Port explosion, especially in the vicinity of the old train station in Mar Mikhael, and increase access to safe and inclusive public spaces within the train station, while also reviving the urban fabric of the city.

Italian Ambassador to Lebanon Nicoletta Bombardiere stated that: “Upgrading and accessibility of green spaces, as well as conservation and requalification of urban sites are the core of the Italian Cooperation interventions. This project will allow people in Beirut to rediscover the old train station of Mar Mikhael, and its historical relevance. At the same time, we remain committed to respond to basic needs, such as social housing, restoring the cultural and social fabric of mostly affected neighborhoods.”

‘‘Inclusive public spaces are key to the sustainability of healthy, happy, safe and prosperous cities and communities. We at UN-Habitat greatly value the support of the Government of Italy through this project. Together we will revitalize public space areas within the Mar Mikhael train station and ensure adequate housing within the same area – thereby having a multiplier effect on the overall wellbeing and recovery of the city.’’ said Taina Christiansen, Head of UN-Habitat Lebanon Country Programme. “As we continue to apply an area-based approach to support Lebanese cities recover from ongoing crises, we re-affirm our commitment to improving the lives of people across the nation as we move forward for a better urban future,’’ she added.

This project is an extension of the long-standing successful partnership between UN-Habitat and AICS in Lebanon, in which they are cooperating on a separate project at the municipal level, which will improve local planning capacities and the socioeconomic conditions of local populations.