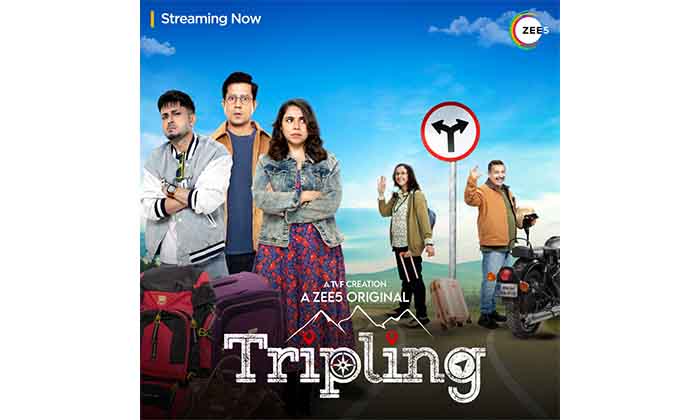 What is making viewers across the world fall in love with ZEE5 Global’s hit series Tripling’s bittersweet siblinghood story?

Siblings are usually seen as friends we never get to choose. Through the decades, this special bond between sisters and brothers has been depicted on screen using varying lenses, capturing the relationship’s bittersweet moments. ZEE5 Global, the world’s largest streaming platform for South Asian content, recently introduced one such heart-warming story of a trio sibling to the world with its marquee slice-of-life drama series, Tripling S3. The mundane yet relatable hilarity of the show captivated viewers across the world, making it amongst the top Hindi Originals launched in 2022 on the platform.

World over, viewers across age groups, especially between 18-35 years have been won over by the on-screen story of the unusual Sharma family in India and their dilemma when the senior Sharmas wish to separate. Their touching relationship dynamics representing South Asian culture, the nuances of having siblings and the warmth of family have been warmly received. The show recorded an astounding 43 million viewing minutes globally in just three weeks of its release. The strong siblinghood focus of the show is also increasing the consumption of the series’ first two seasons as the platform recorded 3X growth of Tripling Season 1 and Season 2.

Capturing the timeless essence of lighthearted family drama and comedy, the show is produced by Arunabh Kumar, of TVF fame and directed by Neeraj Udhwani. Season 3 of the beloved series brings back the crackling chemistry and power-packed performances of Sumeet Vyas, Maanvi Gagroo, Amol Parashar, Kumud Mishra, Shernaz Patel and Kunal Roy Kapur. Written by Arunabh Kumar and Sumeet Vyas, the screenplay is by Sumeet Vyas, and the dialogues are by Sumeet Vyas and Abbas Dalal.

The all-new season, consisting of five episodes, revolves around the news of Charu and Chinmay (the parents) separating. This devastating yet seemingly well-thought news forces the siblings – Chandan, Chanchal and Chitwan to go on a new adventure back to their paternal home in the hills. Packed with laughter, emotions, and heartfelt moments of families, the emotional yet fun story of the three facing the challenge of losing their family and their home delighted viewers across continents.

Commenting on the show’s success, Arunabh Kumar, Founder, TVF said, “Tripling’s global resonance proves that a good story tapping into the familiar contours of family life can find sonority in every corner. Tripling’s portrayal of an ordinary South Asian family helped viewers connect to their roots, especially those living away from home. It reminded all to pick up their phone and drop a call to their parents. That is the power of this series, and I am extremely proud to see ZEE5 Global take this fun and emotional story to the world.”

Tripling’s popularity rides on the increasing demand for light-hearted titles worldwide. With comedies and slice-of-life genres being the most watched categories, the show’s portrayal of siblinghood brings unusual drama and buckets of humour. As more and more consumers unwind with easy-to-watch, short formats of digital entertainment shows like Tripling capture audiences with their high emotional connection while being culturally rooted.