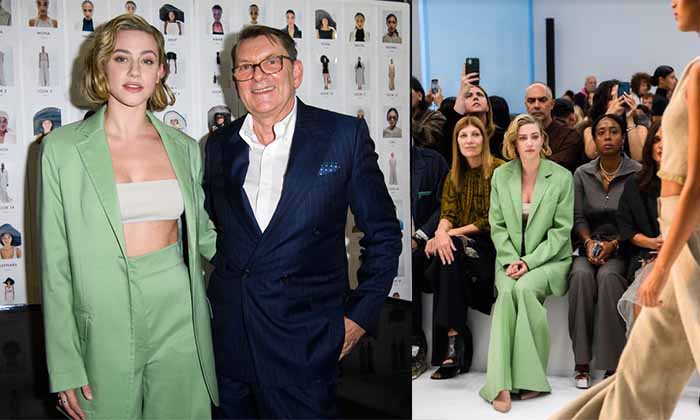 Actress Lili Reinhart will be the 17th recipient of the annual WIF Max Mara Face of the Future Award® to be presented to her during the 2022 WIF Honors on Thursday, October 27th at The Beverly Hilton in Beverly Hills, California. The award recognizes her distinguished acting achievements and personal embodiment of timeless style and grace. Reinhart will travel to Milan, Italy to meet the Maramotti family and attend the Max Mara Spring/Summer 2023 Fashion Show on Thursday, September 22nd .
“We are thrilled at Max Mara to honor Lili Reinhart as our new Face of the Future. She embodies all aspects of our values as a businesswoman, talented actress, and advocate for causes that put women at the center and make them feel good in their own skin. It is an honor and a pleasure to be able to celebrate such an artist, who to us is not only an ambassador of style but also of what Max Mara stands for as a brand.”
– Maria Giulia Prezioso Maramotti, third generation of Maramotti Family and Max Mara Global Brand Ambassador
“WIF is proud to honor Lili with the WIF Max Mara Face of the Future Award, not only for her incredible style and growing talents behind the scenes with her production company Small Victory productions, but her fearless advocacy on mental health and body image issues. Lili represents the next generation creator who is extraordinarily talented and committed to social change, making her a great addition to the dynamic list of women who have received this award
over the past 17 years.” – Kirsten Schaffer, WIF Chief Executive Officer Lili Reinhart has quickly amassed an impressive resume as one of Hollywood’s most exciting young actors on screen and is quickly becoming a multi-faceted talent with a production company deal at Amazon Studios and serving as an executive producer on her recent films.

Reinhart is currently starring in Wanuri Kahiu’s LOOK BOTH WAYS, which she executive produced for Netflix. The film follows Reinhart’s character diverging into two parallel realities: one in which she becomes pregnant and is navigating motherhood as a young adult in her Texas hometown, and the other in which she pursues a career in Los Angeles. In both journeys, her character experiences life-changing love, devastating heartbreak, and rediscovers herself.
The film debuted at #1 in the United States and has been holding at #2 globally across all films since its August 17th premiere on Netflix.
Previously, Reinhart starred and executive produced the coming-of-age drama, CHEMICAL HEARTS, based on the best-selling novel Our Chemical Hearts written by Krystal Sutherland. The film premiered on Amazon Prime and marked Reinhart’s debut in an executive producer role.

Reinhart also starred in Lorene Scafaria’s feature film HUSTLERS opposite Jennifer Lopez, which premiered at the 2019 Toronto Film Festival and went on to make over $150 million at the at box office. Additionally, the film was nominated for “Best Feature” at the 2019 Gotham Awards and won the New York Film Critics (NYFCO) as one of the “Top Films of the Year.” Reinhart’s other film credits include: Melanie Laurent’s GALVESTON opposite Elle Fanning and Ben Foster which premiered at the 2018 SXSW Film Festival and Julia Hart’s MISS STEVENS, opposite Lily Rabe and Timothee Chalamet which premiered at SXSW in 2016.
As a producer, Reinhart closed an exclusive first look television and feature film deal with Amazon Studios under her production banner, Small Victory Productions. Their focus will be on developing modern young adult content that celebrates diversity and inclusivity, in addition to championing new voices and bringing their stories to life.
Reinhart is well known for playing ‘Betty Cooper’ in Greg Berlanti’s television series, RIVERDALE which is based on the famed Archie Comics. For her performance, Reinhart won seven Teen Choice Awards and has been nominated for three People’s Choice Awards for “Favorite Drama TV Star” and “Female TV Star” along with a 2021 Critics Choice Super Award nomination for “Best Actress in a Superhero Series.” Additionally, the show has received a 2018 MTV Movie & TV Award nomination for “Show of the Year” and a 2019 nomination for “Best Show.” The series won a 2019 Teen Choice Award and People’s Choice Award for “Favorite/Choice TV Drama.” The series will begin production on its seventh and final season for The CW.
Reinhart is a New York Times Best-Selling Author for her book, SWIMMING LESSONS which is a collection of poetry that was released by St. Martins’ Publishing in 2020 and is available for purchase worldwide.
Reinhart is an activist for mental health and body image and uses her platform to raise awareness to these issues.