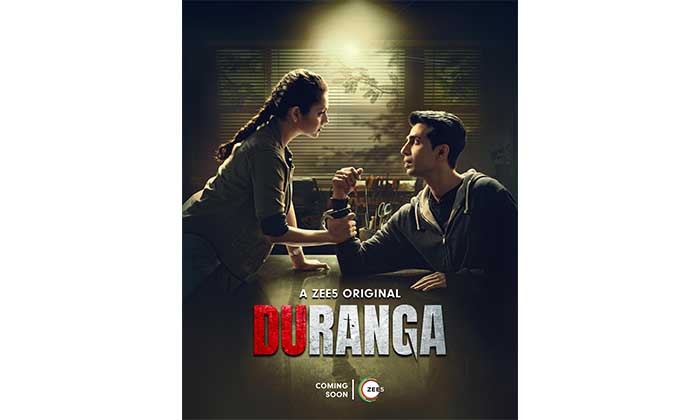 ZEE5 Global, the world’s largest streaming platform for South Asian content, is all set to announce its next original – Duranga. Directed by Pradeep Sarkar and Aijaz Khan, Duranga is an official adaptation of the Korean show named ‘Flower of Evil’. Helmed by Goldie Behl and Shradha Singh, the romantic thriller will star Gulshan Devaiah and Drashti Dhami as protagonists and will premiere on the platform in August 2022.

Produced by Rose Audio Visuals, Duranga chronicles the love story of Sammit [played by Gulshan Devaiah] and Ira [played by Drashti Dhami], that unfolds in three different timelines. Hiding a twisted past, Sammit maintains a facade of a perfect husband to his Inspector wife — Ira. With a series of twists and turns, Ira begins investigating multiple gory copycat murders by the suspected accomplice of a psychopathic serial killer Bala, twenty years after his suicide. This case leads her to some shocking revelations about her husband! In true Kafkaesque style, the story will show how the protagonists wade through constant problems, despite which, they stand tall. But still leaving you with a question – How well do you know your partner?

Archana Anand, Chief Business Officer, ZEE5 Global, said, “At ZEE5 Global, we have been constantly innovating to launch compelling stories that keep viewers entertained and our latest series ‘Duranga’ is yet another state-of-the-art mystery. Duranga is an adaptation of the popular Korean programme “Flower of Evil”, with a unique twist that makes it more relatable to South Asians. We strive to continue to cater to the ever expanding appetite of South Asian communities, and bring forth such compelling stories. ‘Duranga’ is the perfect addition to our growing line-up of crime-thrillers.”

Nimisha Pandey, Chief Content Officer – Hindi Originals, ZEE5 said, “Korean shows and their intricately relatable storylines have found a huge fan base in India, and we are thrilled to present the first ever adaptation of a Korean series in the Indian market. We are excited to unveil ‘Duranga’ on ZEE5, a unique love story with a twist where circumstances pit lovers against each other. Our vision of creating the show has been brought to life by an exceptional team at Rose. It was a pleasure to collaborate with Goldie Behl, and directors Pradeep Sarkar and Aijaz Khan. With ‘Duranga’, the audiences will witness Drashti Dhami in a stellar performance as a cop, a never seen before avatar for the audiences. Gulshan Devaiah enlivens the complex character of Samit Patel with aplomb, making it a captivating watch. We hope the audiences enjoy the rollercoaster ride that ‘Duranga’ will deliver.”

Goldie Behl, Producer, Rose Audio Visuals commented, “It’s always been a pleasure collaborating with ZEE5 Global and looking forward yet again, this time with Duranga. Nimisha Pandey, the content head at ZEE5 Global has been very forthcoming of the concept of Duranga and gave us the required support while making the show. At Rose Audio Visuals we have always been committed to produce quality, out of the box content which is also entertaining. Duranga is a step forward in that direction. It is a special subject because it explores the concept of marriage but through a unique twisted lens, something you have never seen before. The unusual pairing of Drashti Dhami and Gulshan Devaiah has worked very well for us. Their characters in the show come from very varied, distinct backgrounds and they both have divulged completely into it.”

He added, “Duranga primarily deals with the subject of how well you know your partner and then explores the story further. We may believe that we know our partner really well, but do we really? That’s what Duranga will explore and answer. Very excited to present the show and we hope the audience totally resonates with it the way we did.”