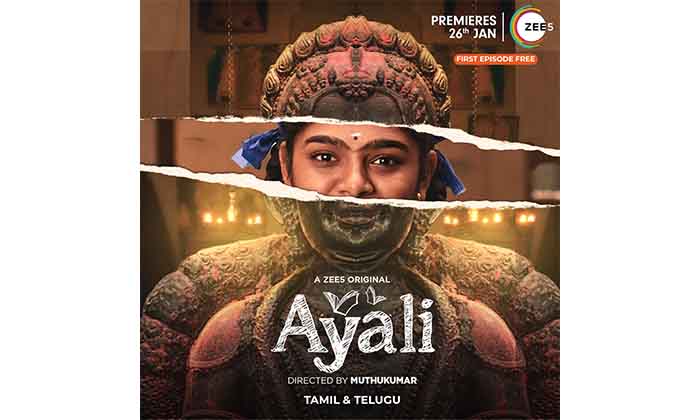 Ayali is a social drama revolving around a young teenager, Tamil Selvi, an eight grade student who dreams of becoming a doctor. However, customs in her village Veerappannai dictate girls to get married off once they hit puberty. They believe that not doing so will make Goddess Ayali angry, leading to a deadly curse. Shattering age-old beliefs and customs, Selvi fights against all odds to achieve her goal of becoming a doctor but will her defiance bring the change that could light the way for other little girls in Veerappannai?

As seen in the trailer, Ayali is a coming-of-age story which highlights the grit, wit and free will of a youngster, Tamil Selvi in her quest to break age old customs and rituals. In addition to the main cast, Ayali also has guest appearances by Lakshmi Priya, Smruthi Venkat and Bagavathy Perumal. With a stellar cast, a social message and an entertaining plot, Ayali is set to premiere on ZEE5 Global on 26th January.

Archana Anand, Chief Business Officer, ZEE5 Global, said, “ZEE5 Global has always brought forth resonant stories from South Asia’s hinterlands to the global audience. This time, we are excited to bring for global viewers an all-new story of perseverance, Tamil original series, Ayali. It is an empowering tale of a girl breaking age-old stereotypes to become a doctor, and inspiring others to follow their dreams. This Original series exemplifies our commitment to provide a global platform to content creators to share empowering stories to educate and inform the masses.”

Kushmavathi, Creative Producer said, “Despite the abundance of women stories in the entertainment industry, I believe that there still a long way to go in terms of presenting these stories candidly and purposefully. My mission as a producer is to discover and present these women-fronted stories and do complete justice to them and that has been my effort with Ayali too”.

Director Muthukumar said, “Streaming platforms today are presenting stories which are successfully changing the perspective of masses and Ayali is our sincere attempt to instil that change without being preachy. The series is a coming-of-age tale of women education and empowerment and fighting against all odds to achieve ones dreams and aspirations. We are grateful to ZEE5 Global for giving us their platform to showcase this need of the hour story”.