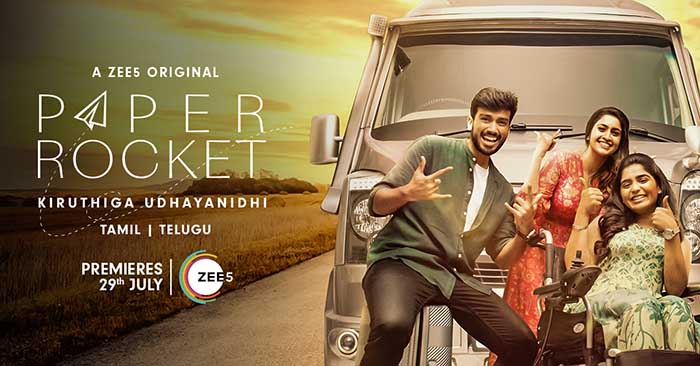 Paper Rocket, a feel-good series and a heart-warming tale, directed by Kiruthiga Udhayanidhi and produced by Sreenidhi Sagar of Rise East Production is all set to premier on ZEE5 Global, the world’s largest streaming platform for South Asian content, from 29th July onwards. Centered around human emotions, the series features Kalidas Jayaram & Tanya Ravichandran in lead roles, and takes a philosophical approach towards life and focuses on finding happiness in every aspect of life.

Not only has the remarkable music of Paper Rocket captivated everyone’s imagination but its recently released trailer has left everyone awestruck. Mounted as one of the biggest launch events ever for any web series, the trailer launch was attended by who’s who from the Chennai movie industry.

Archana Anand, Chief Business Officer, ZEE5 Global, said, “In the last few years, the global markets have seen a fast-expanding appetite for regional content, especially across South Indian languages. To cater to this demand, we have launched a slew of exciting titles in Tamil, Telugu and other languages which go across genres and these have been very well received. After the successful release of the movie Veetla Vishesham, we are elated to now unveil ‘Paper Rocket’ – a series that portrays the ups and downs of life in a heartwarming story and also one with an exceptional soundtrack.”

Siju Prabhakaran, Chief Cluster Officer- South, Zee Entertainment Enterprise Ltd., said, “The series on ZEE5 are consistently garnering a spectacular response. Directed by Kiruthiga Udhayanidhi, it throws light on what life is all about. I am happy that it has come out very well. I hereby request members of the press and the audiences to watch this series and extend their support.”

An elated Kiruthiga Udhayanidhi , the director said, “Paper Rocket is special and close to my heart. The entire process of materializing this series endowed upon me an enjoyable experience. This series involves some of the biggest names in the industry. While series-based Thriller genres, often become the cherry-pick for any OTT platform owing to its success graph, I would like to thank Zee5 Global for banking trust on Paper Rocket and facilitating a wide release. Sreenidhi Sagar is the best producer I have worked till the date. The actors have elevated the intensity of the script with their phenomenal performances, and the technicians have adorned it with their impeccable contribution. Sound Design has played a prominent part in this series, and I thank Tapas Nayak sir for his wonderful work. I can assure you all that Paper Rocket will endow you with good experience.”

Actor-producer Udhayanidhi Stalin said, “Firstly, I would like to thank ZEE5 Global. This series will achieve success, and I extend my advance wishes over its success to the entire cast and crew, who have been a part of it. Although Kiruthiga had lots of personal issues while making this series, she has done a great job by completing it successfully. This project is very dear to her and she really has exerted herself on this with a lot of hard work. She has made good entertaining movies that have lots of importance for love and romance, but whenever I approach her asking if she has got any scripts for me, it would be just ‘Crime-Thrillers’. I am glad her dedication has shaped this project. I wish everyone on the team great success in this series.”

Actor Silambarasan said, “Firstly, I would like to thank Tamil Nadu Chief Minister Stalin sir and Udhayanidhi anna for being great support when my father’s health was ill. Udhayanidhi is so easily accessible, and he never misses extending his help to everyone, who approaches him. It’s not just about helping during the need of medical emergency, but he makes sure to enquiring about the condition very often, which is something beyond the regular humanitarian grounds. I and Kiruthiga madam were supposed to work together on a movie. According to me, there’s no such classification in the movie industry as men and women filmmakers, but I doubted if she is happy and enjoying her profession as a filmmaker. However, I am glad and surprised to see her insatiable passion and earnest hard work, which is evident in this output. This series is awesome, and I wish everyone on the team a grand success.”

Kaushik, ZEE5 said, “This series will appeal to the interest of everyone in both emotional and narrative aspects. I am confident that everyone will like this series.”

Producer Sreenidhi Sagar said, “I thank my technical crew of this movie for their earnest dedication to this project. As a producer, I am completely satisfied and happy with the way, Paper Rocket has shaped up. Both the actors and technicians are the main reason behind making this series achieve the fabulous output. I request everyone to watch this series and support it.”

Director Mysskin said, “There’s a whole lot of experience imbibed to this series. These days, many have started following the trend of placing good scenes alone in the trailer, which stops the audiences from watching the whole show. In contrast, Kiruthiga has done a neat job with this trailer. She is talented, and I have seen it many times. The show has shaped up very well. It would be nice if everyone starts making movies and shows that have simple, neat, and clear-cut narration, instead of going with a complex structure and confusing the audiences. The show looks amazing, and I wish the entire team grand success.”

Director Mari Selvaraj said, “Kiruthiga has a different perception about the films, and her way of approaching the stories is different. I feel envious watching this beautiful trailer. I am sure that the actors, who have been a part of this show would have earned a new experience. Web series always gives more scope for the actors, and I am confident that the proficiency of many actors in this series will be unveiled soon. I am a huge fan of the Zee5 Global Original series ‘Vilangu’. I wish this crew to make a great impact with this series like Vilangu.”

Editor Lawrence Kishore said, “Paper Rocket was beautiful and amazing as a script itself. The show has very good characterizations and a heart-warming emotion as the centerpiece. I request everyone to watch and show their support.”

Music director Simon K King, “Usually, I am approached to deliver music for thriller movies, and it was a new experience with Paper Rocket, as it deals with beauty and essence of life. I am happy with the final output of this series. I thank everyone for their support.”

Music director Dharan Kumar said, “Music plays a pivotal role in this series. I am very glad to be a part of this show. I thank lyricist Vivek for his heart-warming lyrics.”

Cinematographer Richard M Nathan said, “Since the show is about the journey, we enjoyed the complete process of shooting it. I feel that audiences will feel and experience the same happiness while watching this series.”

Art Director Sakthi Venkatraj said, “I got a lot of experiences based on a philosophy of life while working in this series. I got to know about the value and importance of money. This is going to be a special and unique series that will impress audiences from all walks of life.”

Music Director Ved Shankar said, “I have composed a couple of songs in this series. I am happy with the way, this show has come up, and I am excited to tell you that it will be liked by universal crowds. I request you all to watch this series and show your support.”

Actor Kaali Venkat said, “Although I appear for only one episode in this series, It was a satisfying experience for me as that particular episode had lots of emotional and philosophical approaches. I am glad to be a part of this journey-based show and it has endowed me with a good new experience.”

Actor Kalidas Jayaram said, “I thank Kamal Hassan sir for revealing the trailer of Paper Rocket. I am overjoyed listening to his heartiest appreciation. I enjoyed myself a lot while acting in this series. Everyone should watch this series, as it will instill a feel-good experience in all.”

Actor Tanya Ravichandran said, “I felt really happy while working in this series. It was more like taking a meaningful and valuable trip. I thank everyone in the team for making my experience so good and elated.”

Actor Karunakaran said, “I am happy to be a part of a series, which has a new-fangled story. This 7-episode series will depict the beauty and joy of life, and it’s about the lives of 6 characters. I had a great experience working in this series.”

Actress Gouri Kishen said, “As an actor, I desperately wanted to do a web series. When I was narrated about the character I am going to play, I was happy, and it became something, so close to my heart. I thank Kiruthiga mam for giving more importance to the female characters in this series. Paper Rocket will offer a delightful experience to all the audiences.”

Actress Poornima Bhagyaraj said, “I had a long-run desire of acting in a web series and acting for a women filmmaker. Both these dreams have come true through this series. Kiruthiga has done a fantabulous job as a filmmaker. She had perfect clarity of what she wanted to shoot. A lot of big names in the industry are a part of this show’s technical crew. This series is going to be a sure-footed winner, and there’s no doubt about it.”

Actor Chinni Jayanth said, “In my 38 years of the acting profession, this is the first time I am getting an opportunity to act in a series. Initially, when I was approached to play an important role in this series, I was asked if I am proficient in swimming, and my answer was ‘No’. However, most of my sequences were shot in the sea. It was a great experience to share the screen with Kalidas. I have acted with his father Jayaram and now I am elated to be working with him. This show will offer a unique and different experience for the audiences.”

Actor-Music Director Vijay Antony said, “Kiruthiga is a talented filmmaker. I can witness the way, she has approached this series through the trailer itself. I wish great success for the entire crew, and I wish Kiruthiga to establish herself as a great filmmaker.”

Director Balaji Tharaneetharan said, “I knew the story of this series before it got materialized. It’s a feel-good story. I am really happy that Kiruthiga has made the series as exactly as she wrote the script. I request you all to watch this series as it has got lots of takeaways.”

Actor Mirchi Shiva said, “Kiruthiga owns all the good qualities of becoming a successful filmmaker. Making a web series isn’t an easy task, and she has excelled in creating a wonderful series. My heartiest wishes to the actors and technicians, who have been a part of this series.”